How Are Rock Climbing Routes Graded?

A rock-climbing beginner needs to learn about the grading systems and understand what each of them means. There are many different climbing grade systems, which some climbers may use interchangeably.

Before attempting their next boulder, rock formation, or mountain, mountaineers should invest some time researching climbing grades.

Climbing grades are a great way to determine how complex, moderate, or simple a particular climbing route is.

They express a climber's ability level and offer them a means to begin planning their climbing trip.

What Are Climbing Grades?

Climbing grades are a numerical or letter-number combination that indicates the physical difficulty of a climb. Grades advance at discrete stages, each intended to be a degree more difficult than the previous.

Climbing ratings can be difficult to understand, as the scores differ according to the system employed. The grades assigned to a route are determined by those who climb it, making them somewhat subjective.

The more climbers who ascend a route and record their assessment, the more precise the grade becomes.

Grading is done both indoors and outdoors. The Yosemite Decimal System is used to grade both indoor and outdoor sections of most routes in the United States.

Many systems are utilized throughout the world, although the most well-known are the French & Yosemite system.

Why Are Climbing Grades Important?

How Are Climbs Graded?

Grades in the climbing gym begin with the route setter. The majority of setters start their path with a general level in mind. Setters will generally give the grade they believe is accurate once they've completed their route.

Climbs in nature are determined by forces much more significant than humanity, and aside from rockfall, erosion, and minor modification, they do not change. As a result, outdoor grades are generally far more entrenched than interior grades.

Grades are typically used indoors to compare climbs at a single gym. They differ considerably from one gym to the next.

Grades hold up better outside than indoors, although they may vary somewhat from region to region.

Typically, The first ascender is the climber who assigns a grade to the route. The guides' grade becomes the standard for the route until other climbers have climbed it, at which time they are free to offer their own thoughts. Grades can eventually be adjusted if enough time and agreement are given.

Some climbs keep their original grades out of respect for tradition or custom, while others are downgraded or upgraded without warning.

What are the 7 Climbing Grade Systems?

This system is often used on indoor routes and fully bolted sports routes. The scoring is from 1 to 12, with plus and minus signs to indicate how difficult the route is.

This variant of the UIAA system uses a lower grade in place of the UIAA's similar level. The difference between Scandinavian and UIAA is that the former uses whole numbers, whereas the latter uses Roman numerals.

The Yosemite Decimal System is a grading system used in North American climbing sites such as Yosemite National Park and Hueco Tanks. The scale ranges from 1 to 5.15, with expert climbs ranging higher than that.

The scale ranks the difficulty of ascending a certain trail. 1 represents the most accessible walk and 4 signifies a difficult hike.

Genuine rock climbing is represented by 5.0 and above, with 5.4-5.7 suitable for novice climbers and higher grades suitable for only moderate to advanced climbers.

Since the 5 is a fixed point, graders frequently only use the decimal half of the grade.

This scale is similar to the UIAA grade, but it uses Roman numerals and ascensionist grades. The first three letters of the alphabet construct subdivisions from grade VII.

The Elbe Sandstone Mountains, which straddle the Czech Republic and East Germany, are home to this particular scale.

The "Font" Scale, as it's sometimes known, is a climbing scale initially designed in Fontainebleau, France, where bouldering is quite popular. It is the same 1 to 9c scale as the French sports grade, including a plus sign.

If a lowercase "f" is in front of a grade, it indicates the French sports grade, while a capital "F" before the score denotes the Fontainebleau boulder grade.

Sport climbing concentrates on strength and movement rather than equipment setup.

A variation of this French technique is also used worldwide for sports climbing, with a mix of numbers and the first three letters of the alphabet to make a range of 1 to 9c.

The difficulty of a route is determined by this grading system, which examines how trad climbing is used and the most difficult single move on the path.

It breaks down into three grades:

What are the grades of some famous routes?

An excellent route for a first trad climb. It features thin slab/face climbing and a modest roof. Start up a slightly trending slab left past bolts and some small ledges to the base of the roof. A 165-foot rope will get you back to the ground.
‍‍

The first pitch offers excellent face climbing on secure holds. The second pitch is considerably lower in angle and leads to a fantastic and thrilling arete with some significant exposure. Enjoy the view!

The name comes from the splendid view of Obed Rivers and Clear Creek. Take a moment to appreciate the stunning views from this iconic lookout before you begin your descent. Climb above the anchors and enjoy!
‍

Wave is one of the most popular easy climbs at Rushmore. This route can be done as a single pitch with a 60-meter rope, but a nice belay ledge halfway up serves as an excellent start to multi-pitch climbing.

This is a long 1-pitch route that avoids the difficult last two pitches of Solid Gold and maintains the same grade as the first two excellent pitches of that climb.
‍

It is a very continuous 5.11 route with no tricky crux that reaches 5.11d. Excellent stone all around.

An excellent, nicely-protected line in a spectacular setting. The top bolts are perfectly positioned to TR this route if you can get past the crowds.
‍

This four-pitch, 220-foot-long desert stunner is neither spooky nor hazardous. It will lift you high above the desert floor with a panoramic view of Las Vegas and its neighboring areas.

If you want to take rock climbing seriously,  you’ll need to understand the grading system used in your region.

If you're a beginner, start with easier routes and work your way up, taking care to learn the basics of trad climbing before moving on to more difficult routes.

With a little practice, you can climb any route that you like. See you at the top! 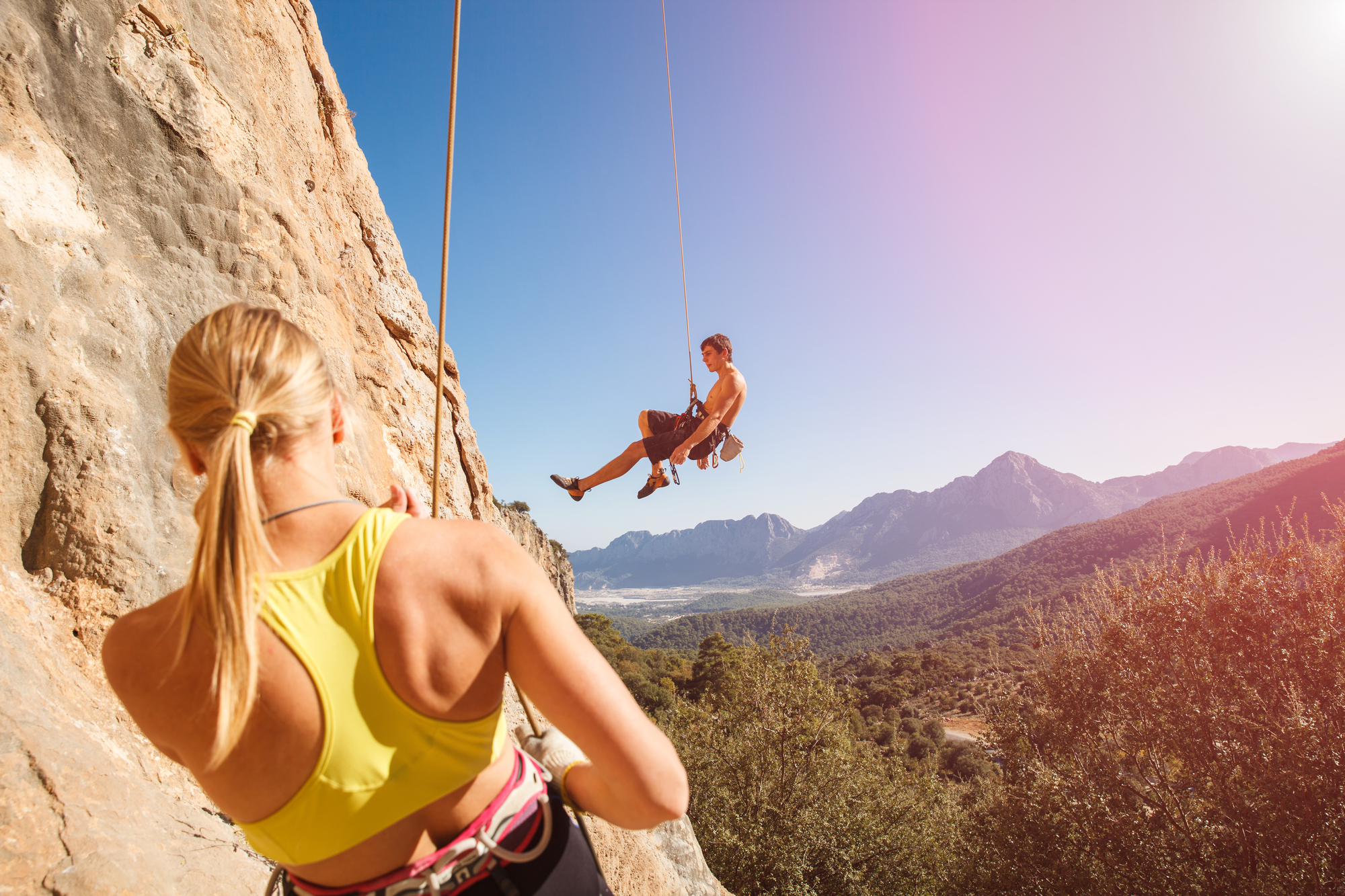 Weighing in On the Matter: Belaying Someone Heavier Than You 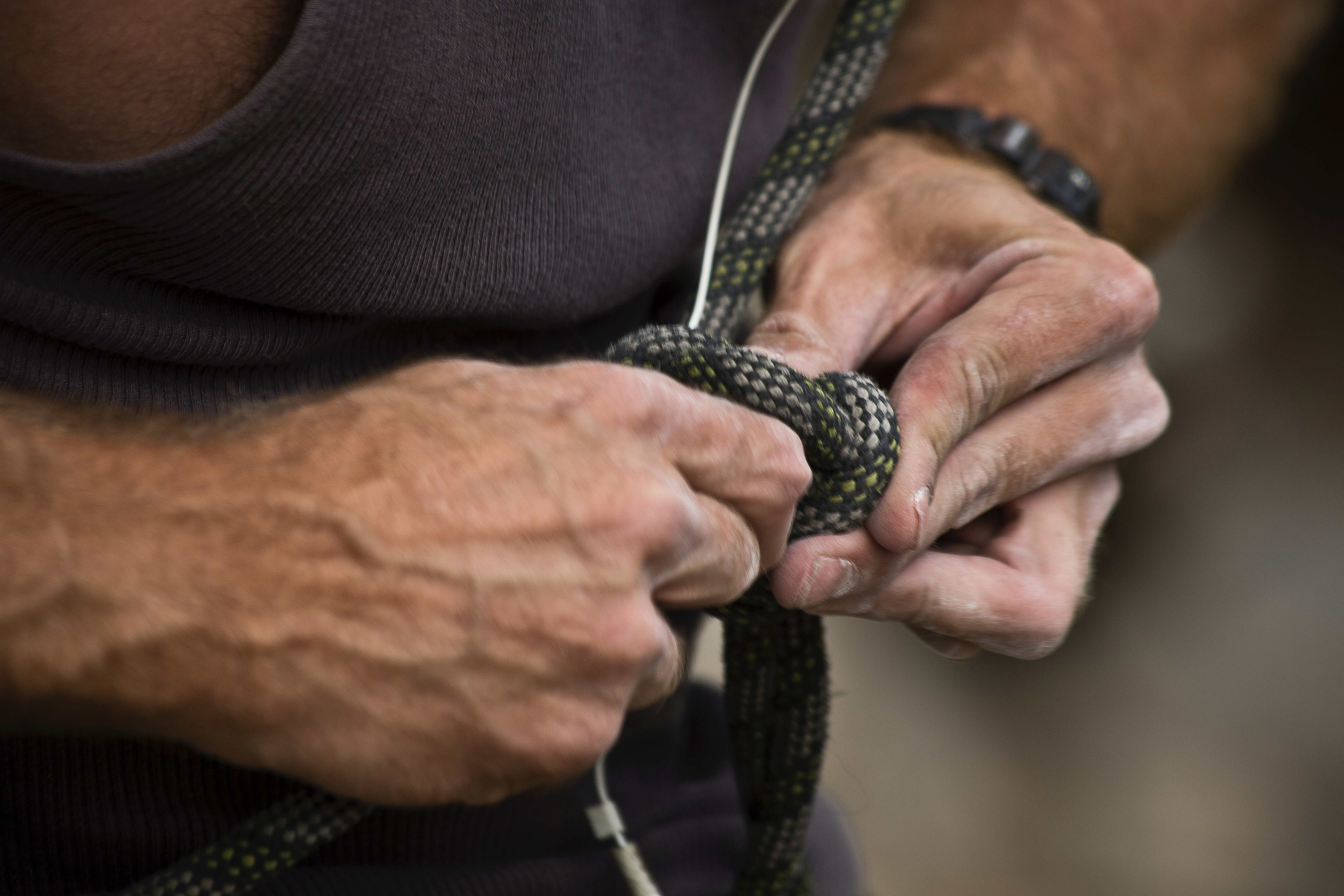 How to Stretch Your Fingers for Rock Climbing: Tips for Increased Performance 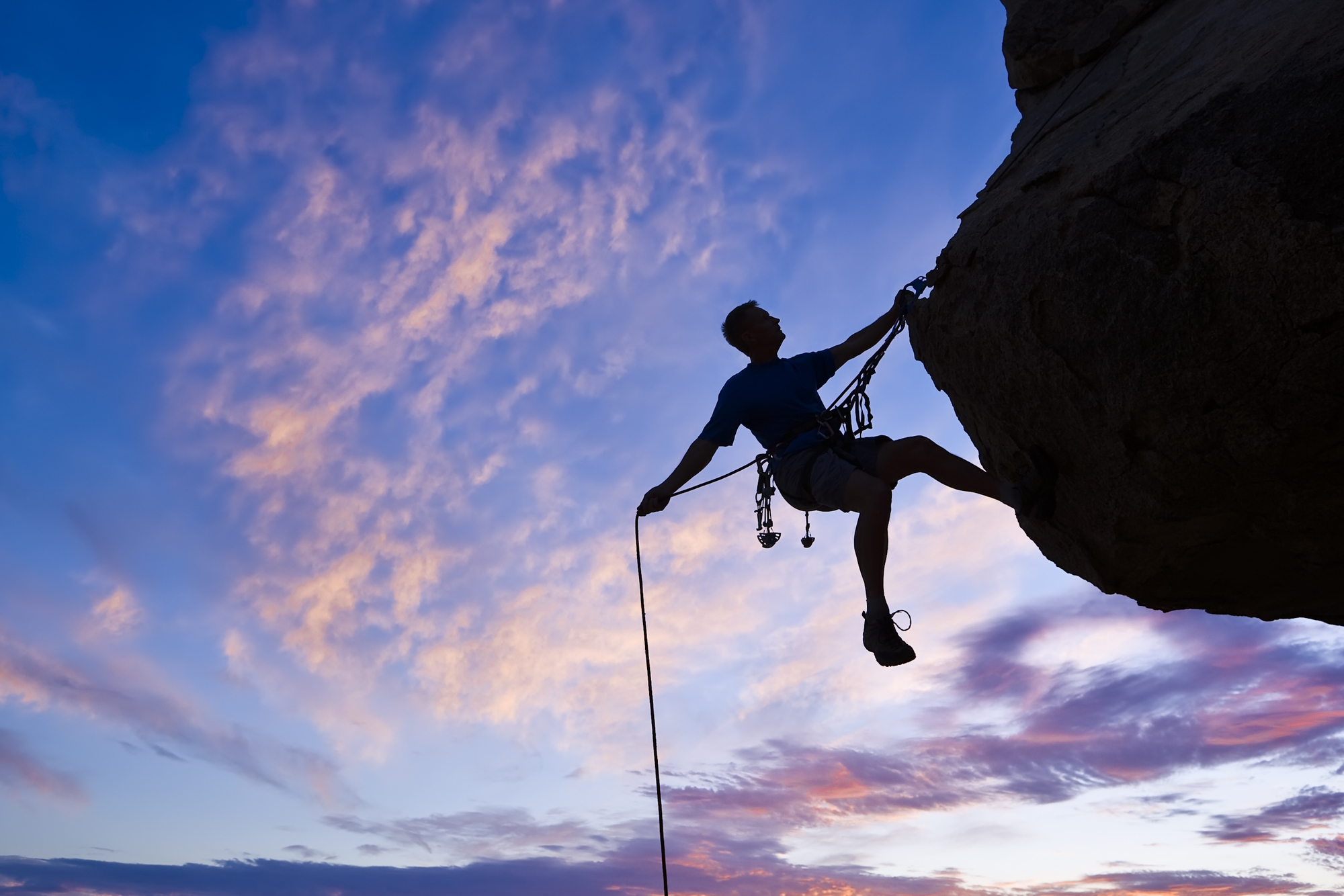 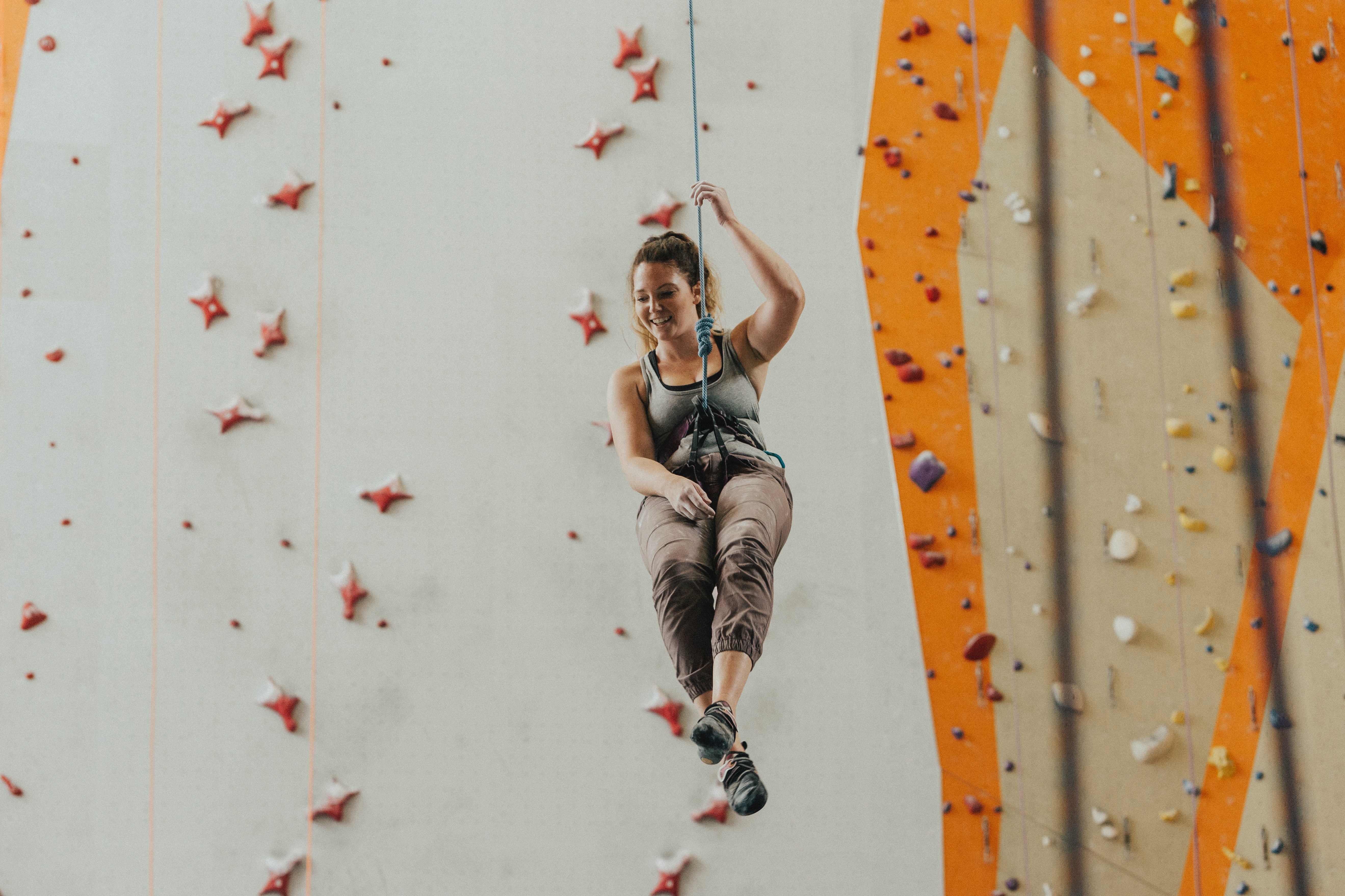